This category lists all of the characters in Pixel Gun 3D. 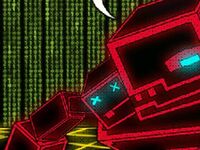 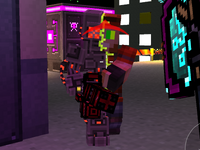 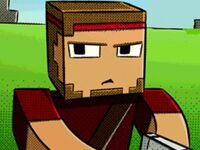 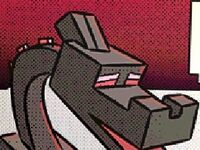 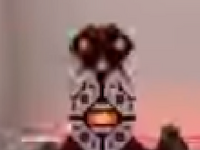 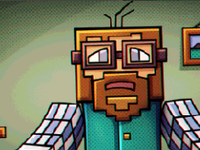 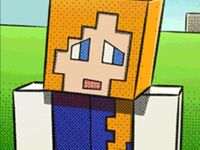 The Admin is the boss of the Citadel level in the Virtual Worlds campaign.

Once defeated, the player will obtain the BIG DATA.

Discovering how his world was ruined, and how he wants to save it.

Pixel Man (also referred to as “Newbie“) is you in Campaign mode.

Pixel Man starts out sleeping in the outskirts of San Blocksisco on his farm when suddenly an outbreak of zombies and monstrous creatures started to infect most of the city’s citizens.

After the latter, he travels with the schoolgirl to the Crossed Worlds, where he finds The Creator and fights the bug that ruined his world. He eventually succeeds, but out of anger, The Bug turns him into a bug himself. He then gets exiled into the Internet.

After being stuck in the internet for 3 years, he was picked up by a group of Rebels who asked him to help them recruit “The Champions”, who are the most powerful players in games that are created by a villan called “Cubic“. After recruiting all 3 of them, they traveled to the Citadel which they were blocked by Cubic’s henchman named “Admin” who took the appearance of a green version of Pixel Man. After defeating Admin and his clones, Pixel Man storms into Cubic’s Citadel and defeated him, only to find out it was a trap and Cubic send him back to the start, Pixel Man is now trying to figure out how to break this cycle Cubic has made.

The Dragon is black with red outlines. It is similar to the Ender Dragon from Minecraft, however, most of the purple colors on the dragon are now replaced by red highlights to avoid copyright infringement.

The dragon sent the monsters in Newbie‘s world. After the Dragon is defeated, Newbie will ask him to chase out the monsters from the world. The dragon agrees, coming up with a question about why they are square and thinks that he could find a solution. The newbie and the Female Survivor then sits on the back of the dragon and flies to the Crossed Worlds. In the swamp level, the Newbie and the Female Survivor passed through a barrier which the dragon couldn’t cross. After the dragon told them that the barrier was made for the creatures of this world, and they bid farewell.

The Evil Bug, as known as “The Bug“, is an unrecoverable error unintentionally made by The Creator while he was creating the game. It is also the boss for the single-player Campaign mission.

It is all black but has red borders all around itself. It has three heads, one big (middle), one medium (left), and one small (right).

The big head has one eye on the right side. It also has a kind of mouth. The medium head has two eyes and a few teeth. The small one is just a miniature version of the medium-sized head. It has a giant glowing red thing in the middle of his chest.

“C.A.K.E” is the boss in the Teleportal from Virtual Worlds.

The Teleportal Champion lost control over himself in an attempt to find C.A.K.E, whom he was extremely obsessed with for some unknown reason. The teleportal champion created this himself-maybe an attempt to get out of cubic- but either: it aggressively protects him, it malfunctioned, was controlled by someone (admin?), it turned against him or TC made this when he went mad and that’s why it is evil.

Later in the fight, C.A.K.E was defeated by the Newbie and the Teleportal Champion has to pay the Newbie by fixing the damaged ship.

It looks like a generic Stalker. It walks on four legs, has a crimson, red body, and possesses a white blaster in its torso.

The Creator, who may seem to be Alex Krasnov, is a character that appears in the Crossed Worlds, in the 5th level ???. He is actually the creator of Pixel Gun World.

In the ??? (Campaign Level) level, he tells the Newbie and Female Survivor that he made an unrecoverable bug when creating a wonderful game. He asks Newbie to defeat The Bug using a device strapped to the Newbie’s head. It is unknown what happens after ??? (Campaign Level). The story is now in a cliffhanger, showing that Newbie is on the internet.

The Creator has a large build. He has brown hair, light blue-gray eyes, and a brown beard. Three strands of hair can be seen on top of his head, where his bald spot is. He wears a green vest, a checkered blue and white dress shirt, and a pair of glasses.

The Female Survivor is a supporting character in Pixel Gun 3D’s Campaign. She does not have an actual name in the game, similar to Newbie.

It is told she was the one responsible for the outbreak of monstrous creatures and knows where and whom to stop it. She appears in all Block World maps sitting down in a corner.

Enemies don’t attack her. She is more of a display in the Block World. She does not appear sitting in any of the Crossed Worlds‘ maps. She waits for Newbie to kill all the enemies and advances with him to the next level.

She does not have any in-game function (apart from the story) as she is part of the map in the said levels.

Pixel - iOS
Pixel - Android
Official Website
Pixel Gun 3D v12.1.1 MOD APK – Money Cheat NEW UNKNOWN PRO TIPS YOU NEED TO LEARN!
Scroll to top
We use cookies to ensure that we give you the best experience on our website. If you continue to use this site we will assume that you are happy with it.OkPrivacy policy
Hafenpromenade 8c/2a. 44263 - Dortmund, Germany | Help/Support E-Mail: [email protected]